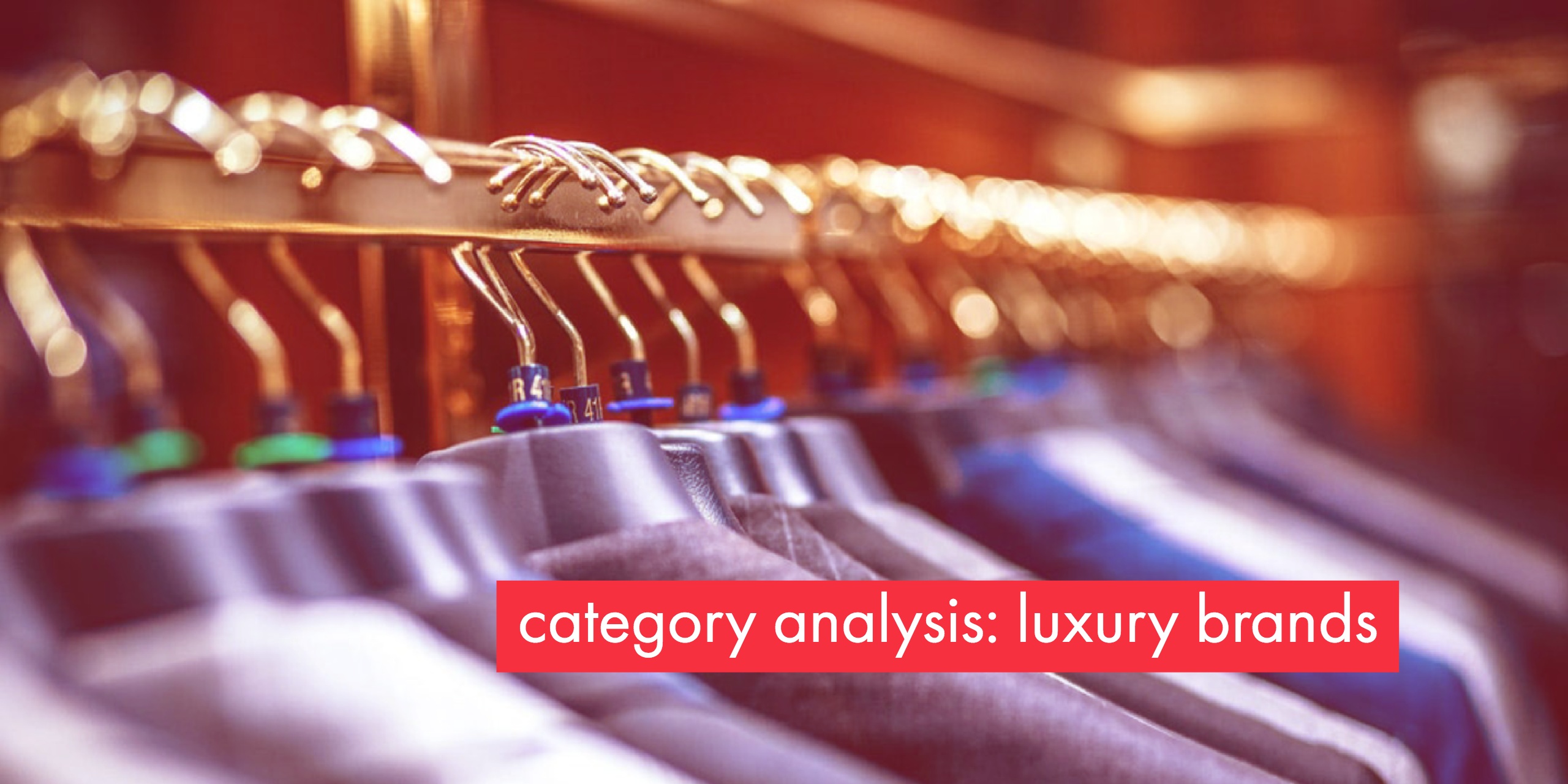 You may associate luxury brands more with VIPs and the superrich, but as it happens, these brands are also active sponsors. You won’t find them partnering with properties their target market will not notice, but each of these luxe sponsors have done a great job identifying their fit in the industry and putting their individual stamps on the events and properties they choose to sponsor. We’ll be going in depth on three industries participating in luxury sponsorship – including auto, watches, and clothing – and discussing where these brands put their dollars.

Two traditional sponsorship categories remain the same: entertainment and sports. One additional category that sees quite a bit of luxury investment compared to mainstream brand investment is the cause marketing and philanthropic category. In each industry, we have least one (but usually more) brand finding a cause, foundation, or philanthropic event that aligns well with their missions and target markets.

Take a quick peek at the chart below to see what we’ll be discussing: 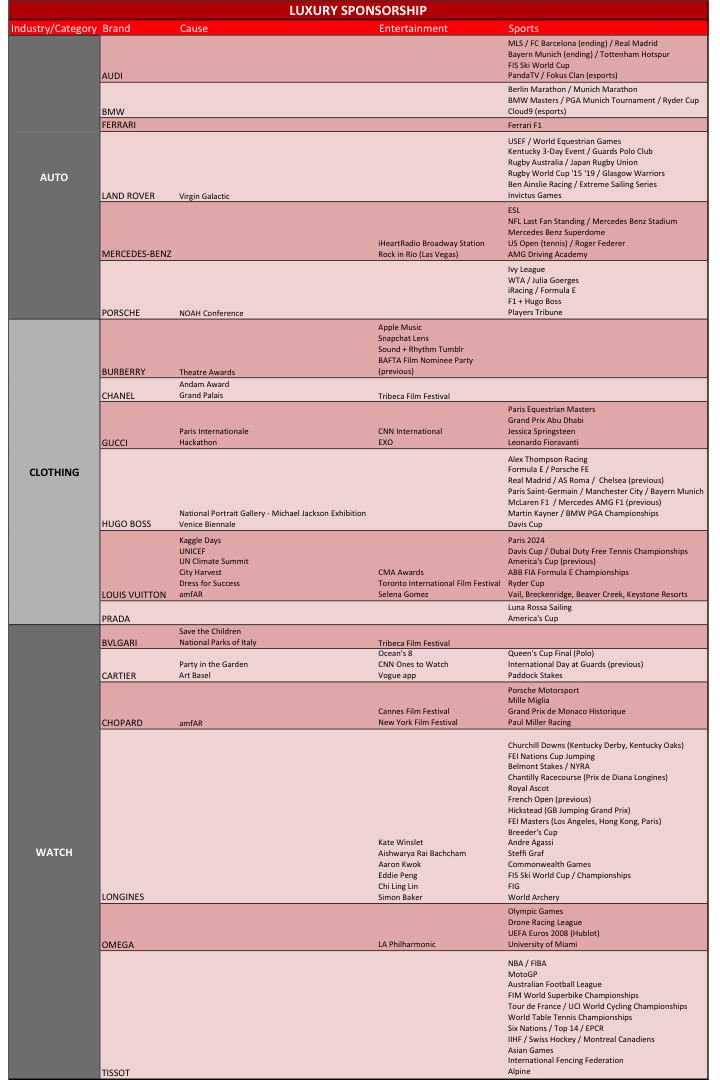 Most active in the luxury philanthropic sponsorship category are those brands in the clothing category. What’s particularly interesting is the wide variety of causes these brands have identified as aligning with their own missions and markets; you can see above there’s everything from a Hackathon to a UN Climate Summit.

In this category, Louis Vuitton Moet Hennessy (LVMH) is the most active brand, and has particularly aligned itself with high-visibility organizations with a lot of brand value and clout in the industry. We determine this preference to help ensure the brand steer clear of controversy, ensure the ongoing existence of the relationship, take a stand on important issues, and to receive positive press. On the Moët Hennessy side, Dominique Giovine (at the time Director of Champagne Strategy), discussed the brand’s affiliation with Dress for Success on the Moët Hennessy Professional Women’s Group meetings and why the relationship is so valued:

Very simple- when a woman comes in and announces a positive change she has made in her life due to something that inspired her from one of our meetings. We have had women get promotions, empowered them to discuss issues with their managers, motivated them to achieve goals and no longer be homeless, and even quit their job to become an entrepreneur! It is so inspiring to hear of their bravery and determination.

Other notable partnerships include Chanel’s Grand Palais and Gucci’s Paris Internationale relationships – both of these were likely embarked upon due to the brand’s historical involvement with the venue and city. Each brand, then, is likely to want to be involved in the effort to upkeep, improve, and keep those properties going in years to come.

Our most interesting partnership in this category is Bvlgari’s relationship with the National Parks of Italy. Bloomberg notes in an article companies are able to sponsor parks in that country without being ostentacious or too over-the-top. It further speculates this should be a course for American parks to emulate; the question is: can we? Sponsorship should be a mutually beneficial relationship, and while we believe the parks could offer subtle and important assets to brand, we wonder if the current market would be interested. We’re excited to follow this opportunity to see if it goes further.

You’ll also note we have a repeat philanthropic organization here: both LMVH and Chopard are involved with amfAR.

Film festivals lead the way for entertainment sponsorship involvement in the luxury brand sponsorship realm. This makes sense: film festivals, especially those targeted by these brands, are fairly exclusive events with a high concentration of individuals likely to be or already interested in each of these brands. Interest comes largely from the watch and clothing sectors, with LVMH (Toronto International Film Festival), Chopard (Cannes Film Festival, New York Film Festival), Bvlgari (Tribeca Film Festival), and Chanel (Tribeca Film Festival) all partnering with these events. In a similar vein, Burberry had a partnership with the BAFTA Film Nominees Party (with which it later pulled out), and the London Evening Standard’s Theatre Awards.

On the music side is a partnership we mentioned in our Automotive Category Analysis: Mercedes-Benz partnership with the Rock in Rio festival held in Las Vegas. While this sponsorship has not been repeated, at the time, Stephanie Zimmer of Mercedes-Benz had this to say:

Rock in Rio is a different music festival, and when it came to the U.S. we knew it was a great fit to enhance the Mercedes-Benz music platform. It is the largest music festival in the world and has a 30-year track record of producing an unparalleled consumer experience.

This, as with other efforts, supported Mercedes’ “Best or Nothing” slogan.

Another notable entertainment partnership is LVMH’s relationship with Selena Gomez, signed in 2016. Gomez represents a sweet spot for luxe (and other) advertisers, according to Vanity Fair; the article also said:

Beyond just having the most, she has an appealing audience of potential customers: millennial women. Eighteen- to 20-year-olds make up the highest percentage of her followers—about 22 percent of them, according to data pulled by Captiv8. Around half of her followers are female and between the ages 18 and 35.

This is the most active category overall for luxury sponsorship by the brands assessed. We do see commonalities between multiple brands in terms of the type of sport sponsored, the most common deals appear to be with equestrian sports, Formula 1, esports, tennis, sailing, and golf. With the exception of esports – which is a more recent development, and also does not quite fit the mold of the others listed – the fit between these brand and those sports, can be summed up in similar terms as Carol Besler’s description of Longines and its long relationship with equestrian sports:

Longines’ presence at equestrian events is a valuable marketing tool, reaching a crowd that has money and a sense of old-world style. Horse racing is by tradition an elite, aristocratic endeavor – the “Sport of Kings” – drawing high rollers and rich owners who vie for $30-million in prize money at the Breeders’ Cup alone, which is considered the Super Bowl of horse racing.

Outside the sports listed above, we do have brands becoming involved in a hodgepodge of different spors and events, including football (American, Australian, and European), rugby, skiing, marathons, NCAA, and championships (Olympics, Invictus, Commonwealth Games). Since these sports have a wider variety of supporters outside the luxury realm, the strategy behind the relationship differs. For example, with Tissot’s relationship with the AFL, it was about increasing visibility, according to Scott Jungwirth:

For us when we launched our AFL sponsorship 10 years ago it was about establishing brand awareness. With the reach AFL has in the community, and being one of the premier codes in the country, that was the primary reason why we first became their official timekeeper. Over the years we have evolved the way we’ve activated the sponsorship.

With Omega’s longtime Olympics partnership, the relationship (and recent extension) are much more about history. Omega has been the official timekeeper at each Olympics since 1932, and has had category exclusivity since 2002. The contract now runs through the brand’s 100th anniversary with the Games. It’s likely the latest contract extension represented a large boost in spending for the watchmaker as recent IOC deals upped the ante in terms of quadrennnial fees.