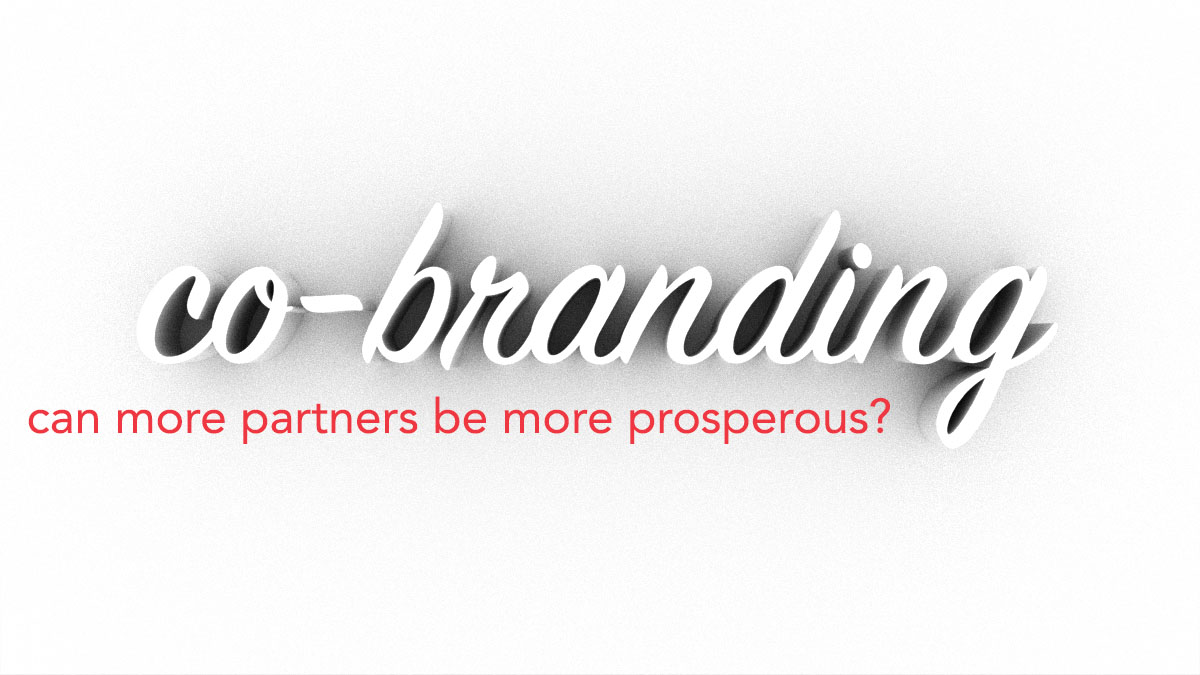 “Cobranding is a marketing strategy that utilizes multiple brand names on a good or service as part of a strategic alliance. Also known as a "brand partnership," cobranding (or "co-branding") encompasses several different types of branding collaborations typically involving the brands of at least two companies.” - Investopedia, "Cobranding"

WHY SHOULD I CARE?

Here’s the thing: cobranding can make your campaign more successful, help you reach your target market more efficiently and effectively, and be a lot of fun. (Sometimes even all three, depending on how you approach the whole situation.)

A sponsorship agreement is one type of cobranding: two brands working together to increase the changes of success for each. It can go further: imagine multiple sponsors of the same rights holder joining together. In the Bay Area alone, the possibilities are endless:

Cobranding can be difficult, and it will not be applicable to each and every marketing campaign. However, with each opportunity, take some time to closely examine a few different aspects:

What are both your brands interested in? What needs a spotlight on it? Please note, not all partnerships will be immediately obvious, but obvious is not necessarily a qualifier for success. Take a look at this not-immediately-apparent partnership between the New York Times and Delta Airlines.

While a major city in the US (home to 5.8 million people, as the video states), Atlanta is not necessarily a “top of mind” city – that designation probably belongs to New York, Los Angeles, and Chicago. But Atlanta is home to the world’s busiest airport, and that airport, along with its major player – Delta – is one of the reasons Atlanta is the most recent US host to a Summer Games (though 2028 in LA is coming up!) It’s likely also one of the reasons Atlanta has the 3rd largest concentration of Fortune 500 companies in the country (according to the video).

This is a piece that benefits Delta, it doesn’t feel like an advertisement – for Delta or for Atlanta. It feels like a human interest story, letting us know how Atlanta has come to be what it is today.

As we stated above, sponsorship is already a type of cobranding. However, may sponsors and rights holders do not approach the relationship as a cobranding opportunity; each tries to fit the other into its goals and plans, perhaps not formulating those together.

CoverGirl and Lucasfilm partnered in 2015 for the release of “Star Wars: Episode VII The Force Awakens.” I’m not sure about you, but CoverGirl and Star Wars together would not have been my first guess at a successful cobrand campaign – but it works. Nor would I think of the two brands having significant crossover between existing markets – but they clearly did. (Or if not, they were extraordinarily successful at gaining a crossover audience). Plus this ad? I’m into it.

In a galaxy far, far away @COVERGIRL+@StarWars have partnered on beauty looks created by @patmcgrathreal and limited-edition makeup inspired by #StarWars #TheForceAwakens. It’s a #beautyforce like never before, channeling the duality that is within us all. #LightSide, #DarkSide—which will you unleash today? #droid #stormtrooper

You remember “Stratos,” I’m sure? In case not, here’s a refresher:

GoPro signed on with Red Bull, which was already the principle sponsor for Felix Baumgartner and his jump from space. And here’s the thing – Red Bull is well-known for its digital and content prowess; it may have started life as an energy drink, but it continues as a compelling content provider. Red Bull was clearly capable of both promoting and filming (and the brand may have been planning to use GoPro anyway, prior to the deal) – but decided a better step would be to partner with another brand that could provide technology solutions. How many more options for filming (and editing, production and promotion!) with GoPro on board?

“Not only did Baumgartner set three world records that day, but he also embodied the value of reimagining human potential that define both GoPro and Red Bull.” - Sophie Bernazzani, "13 Examples of Successful Co-Branding Partnerships (And Why They're So Great)"

How much do people like Doritos? As it turns out, a lot.

How many Doritos Locos Tacos would you be able to eat? pic.twitter.com/wGWhdyEszG

The Doritos Locos Taco was introduced in 2012, and has become the most popular menu item in the chain’s history. It sold over 1 billion units in its first year on the market, and an estimated 15,000 workers were hired due to Taco Bell’s increased popularity stemming from the new taco. It is the result of a collaboration with Frito Lay that took 40 recipes to perfect. And here’s the thing: Taco Bell has a crazy popular item, and Frito Lay gets people thinking about Doritos every time they go to Taco Bell. Not bad.

Let’s go one further with a three-brand partnership. Two of these brands are a natural fit: Specialized, a bicycle brand, and Le Tour de France (you may have heard of it, it’s the world’s most visible cycling race). This was the second collaboration between Specialized and McLaren, the first being the S-Works + McLaren Venge.

The second time around, it was named the S-Works Tarmac and was an exclusive edition with only 250 made. And it was going to launch during the Tour de France.

“This partnership has proven to be interesting for both brands: on one hand, it gives McLaren the chance to target a segment of high-end cyclists—a potential market for its luxury sports cars. And for Specialized, it reinforces its innovative image. Beyond product sales, which were limited to 250 bikes, this partnership created buzz and reinforced the positioning of both brands.” - Francis Dumais, "2016 Sponsorship Trends"

HOW TO GO FROM POINT A TO POINT B

Cobranding takes work. Looking at it purely from a sponsorship point-of-view, it may increase the time takes to plan a campaign or activation – as you’ll be doing so with another organization that may not be on your same timeline. But it may cut down on specific tasks: what if your partner organization is 10x better at graphics design? Or maybe your organization is great at promotion, and your partner is more production-oriented? It may increase the timeline, but may decrease the level of individual responsibility.

Remember: cobranding is not just slapping your sponsor’s logo on your website. That’s logo recognition, and likely a separate line item on your contract anyway.

Cobranding is working together to produce something; it could be a product like the Doritos Locos Taco, it could be an event like Stratos, it could be almost anything. Determine goals together, discuss strategy together, decide on tactics together, and execute together – and hopefully, find success together.