We’ve featured the Olympics, and our FIFA feature is coming soon - but we all know those events have a strong history in sponsorship. What about major events without quite the same level of cache? This week, we’re featuring a few other events, ranging from sport-specific world championships to geographically-restricted events to find just how sponsorship can vary for brands, locations, sports, and events. For the purpose of this blog, we are listing these major-scale events as Tier 2 (not as important to media, athletes, and/or cities).  These events include:

Unlike the Olympic Games, sponsorship programs for these “Tier 2” events can lack stability of partners. While the International Olympic Committee (IOC) has a full roster of multi-year brand partnerships that travel with the Games, these other traveling events typically start anew during each reincarnation. A few governing bodies have one or two major brand partnerships, but for the most part operate in an opposite fashion to the TOP Program leaving almost all categories open for the local organizing committee (LOC) to solicit deals.

A number of these companies have been involved in Tier 2 events as well. Typically, these brands will come from the more prominent, desirable, and some are necessitated by business decisions. Coca-Cola and Visa are most relevant in the latter description, as events stand to bring in a lot of money from both payment processing and beverage concessions.

Samsung and Toyota have been sponsors at several events, as evidenced in the chart below. Also featured are other brands with a presence across these Tier 2 events and the Olympics.

As mentioned above, Tier 2 events operate quite differently from the IOC TOP sponsor program. The best comparison to a previous blog would be how the LOCs for Olympics operate - though in Tier 2, there is significantly more flexibility for partnership solicitation.

These championships are viewed with different lenses depending on region. The European Championships promise to be a pre-eminent continental event; in 2018, the first version of a combined-sport championship will be taking place. This event will pull together the previous single-sport continental championships. It may serve as a proving ground for Olympic hosting in the future.

The Asian Games and South East Asian Games, like the Commonwealth Games we will discuss later, prove a chance for prominence for countries and athletes less likely to medal at a World Championships or Olympic Games. As such, those countries will place a higher importance on the Games. That situation repeats itself with the Pan-American Games, where Canada, Mexico and other countries send their A-teams, while traditional sporting powerhouse, the United States, will often use the event as a proving ground for up-and-coming athletes.

Here in the United States, our athletes do not participate in the Commonwealth Games as it is an event only for commonwealth countries. Therefore, it's not a sought-after event for American sponsors; however, this event is a big deal internationally. While Great Britain is building up its medal count each Olympics, the Commonwealth Games represent a chance for each of its individual nations - England, Wales, Scotland, and Northern Ireland - to compete as a standalone team. And like the Asian, South East Asian, and Pan-American Games mentioned above, the Commonwealth Games serve as a chance for countries lesser-known for medals on the international stage - think New Zealand or India - to stand atop the medal stand.

Like the Olympics, these events’ governing bodies usually have their own sponsors which then become associated with the event. For both the World Equestrian Games and the FIG World Championships, one of those sponsors is timekeeping and watch sponsor Longines.

Unlike the Olympics, these governing bodies lack the pull of the Olympic Games, which results in many more open categories for the LOC to fill.

These three championships associated with the beautiful game represent regional championships for three continental bodies - Africa (Cup of Nations), North and Central America and the Caribbean (CONCACAF), and Europe (UEFA EUROs). CONCACAF and EUROs are a significantly bigger draw internationally, but the Cup of Nations has attracted big brands consistently as sponsors.

Three easily comparable events - geographically - are the 2014 Commonwealth Games, the 2015 FIG World Championships, and the upcoming 2018 European Championships, all hosted by Glasgow, Scotland. Though different in scale, these events offer a closer look at the British and European sponsorship markets.

Nine partners overlapped between two or three of the events, as can be seen below. 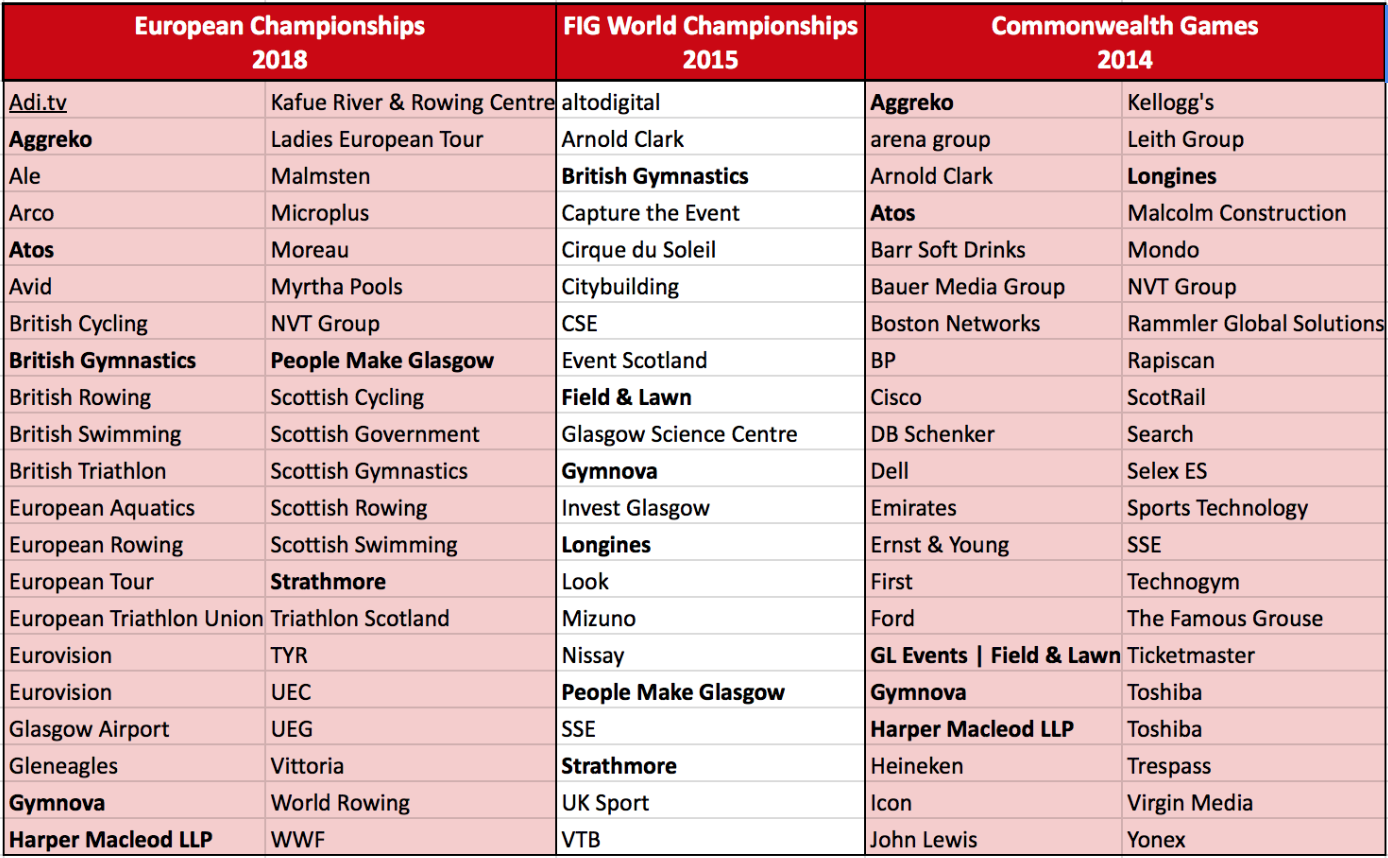 These three events allowed us to see the level of desired investment (both monetarily and figuratively) from UK and Scotland-based brands. It is clear the UK holds hosted events in high esteem and will continually support varying types of events - though at the highest caliber. While US-based brands will have little interest in the Commonwealth Games (and even their own similar Panamerican Games, to be frank), the opportunity for involvement and exposure is fantastic. The most recent edition included participants from 71 countries, resulting in a relatively “easy” way to reach a wide audience.

The events held in Asia (Asian Games, South East Asian Games, and Universiadg 2017) show much less crossover than those held in the UK. While of course Asia is a (much) larger region, the two sets of events are comparable in the utilization of local and regional brands.

On the chart below, you will see hardly any repeating sponsors. All three events have a technology sponsor (two Sony and one Samsung). One that does repeat, Sony, is hardly surprising, as both large brands - Sony and Samsung - are extraordinarily large multinational organizations with roots in Asia, and can probably outspend most other competitors.