The Masters Has Evolved, And So Has Its Sponsorship 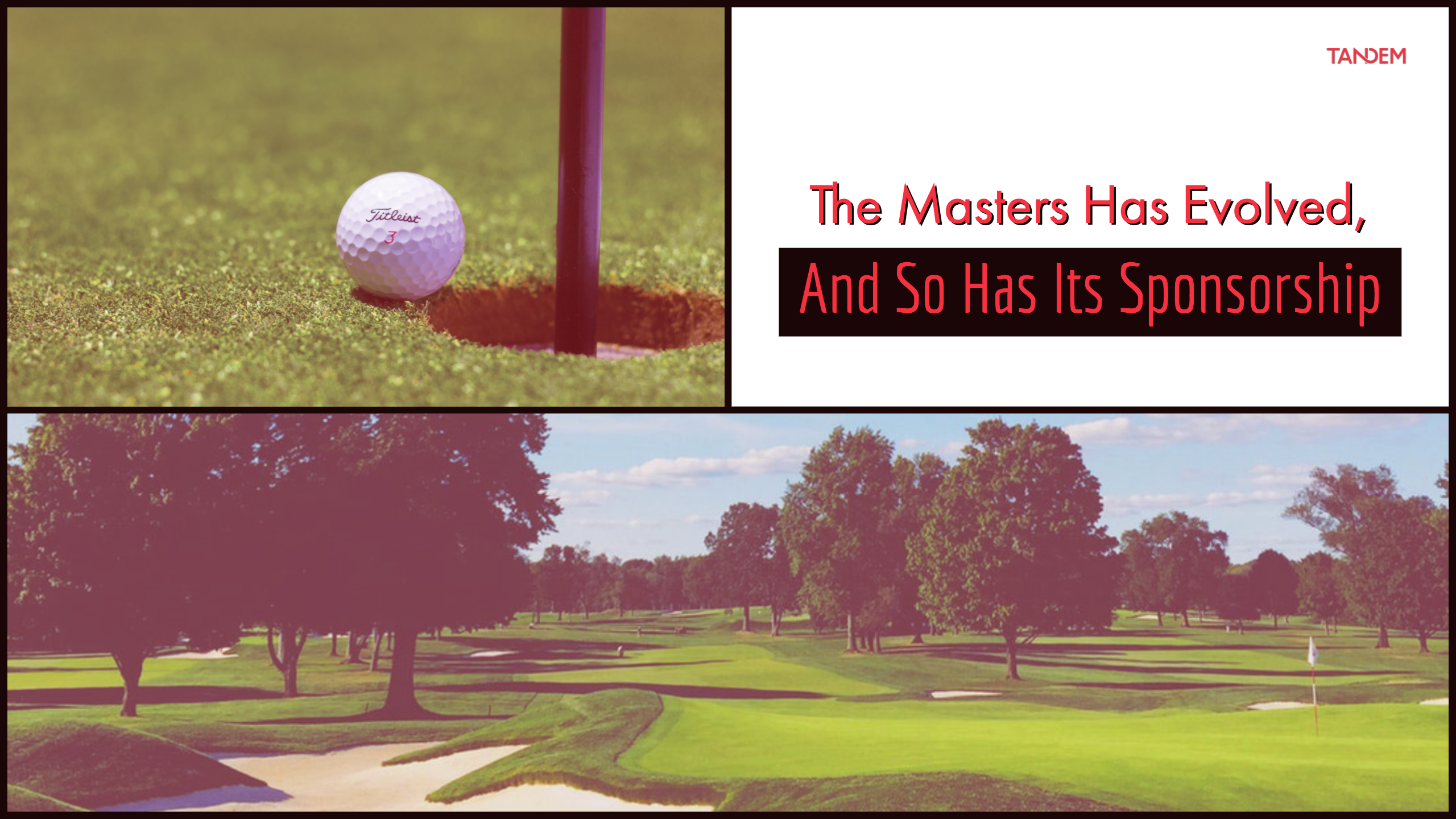 Sport sponsorship, including golf sponsorship, deals typically follow the same model, but not at the Masters. The Augusta National Golf Club, the permanent home of the Masters, is one of sport’s most prestige properties.

In 2013, Mercedes Benz became a global sponsor of the Masters tournament, but has been active in the sport of professional golf since the 1980’s. Their global sponsorship allows the German based automaker to air television ads during the limited commercial space in domestic telecasts. Viewers of the Masters tournament is a targeted audience for Mercedes, and this year fans watching were the first to see Mercedes’ new U.S. marketing campaign. The TV ad campaign is a series of cinematic commercials that showcase the diversity of its car lineup and peak of the American luxury car market.

During the tournament, the brand exclusively covers all aspects of the Masters and Mercedes brand ambassadors. It was a great platform to release the “What Makes Us Campaign”. During the Masters, all the players competing and a number of selected guests each have a vehicle at their personal disposal. This service is also provided to the Mercedes-Benz brand ambassadors. Rickie Fowler (USA), a brand ambassador and runner up of the 2018 Masters, drove a G‑Class during tournament week.

However, Mercedes corporate sponsorship doesn't end there. Mercedes allows golf fans to view and stream numerous exclusive videos and photos. During the 2018 tournament, anyone interested could take part in discussions on social media with the hashtags #PerfectDrive and #MBGolf.

Mercedes hospitality goes above and beyond giving certain guests the ultimate VIP experience at the luxurious Masters tournament. The brand’s VIP Experience included:

Mercedes-Benz sponsorship is evolving year by year at the Masters. Through its global presence on and off the golf course, the brand supplies fans with information and special insights via social media and attempts to provide the ultimate guest experience. It's truly a partnership "Stronger than Time".

IBM is another global sponsor of the Masters. Although this sponsorship may not be involved in capturing fans attention, it is a key component to the Masters’ success. IBM is heavily involved behind the scenes and provides great amount of knowledge and technical know-how to help this lavish tournament succeed. The deal includes “IBM designing the Masters aesthetically pleasing website, to churning data and spitting out analysis that broadcasters can relay to at-home viewers.” IBM creates that special content for all fans and viewers to enjoy during the Masters. This partnership began in 2016.

IBM’s global sponsorship is very different than global sponsor Mercedes-Benz. Mercedes runs campaigns before and throughout the tournament, and hits consumers with branding promotions. IBM does not participate in branding promotions, instead focusing on providing complete development of the Masters Android, iPhone and iPad apps. On a mobile devices, fans can find the a small IBM logo at the top right hand corner of the screen. IBM Watson also keeps an eye on things, spotting great shots and producing its own highlight videos for fans to follow.

IBM is not only evolving as a sponsor at the Masters, but the company as a whole has gone through some impressive changes. IBM is starting to surpass competition in the digital world and drive change. The Masters is successful at spreading its message as one of golf's most prestigious tournaments thanks to its sponsorship with IBM.

In 2013, the Masters went through a major shift in its sponsorship strategy. The tournament parted ways with ExxonMobile, and changed its relationships with multiple sponsors. ExxonMobil departed without a publicly stated reason; the brand had originally joined the tournament almost ten years prior following the sponsorship protests of 2003 and 2004. Coca-Cola and Citigroup are other former Masters sponsors. Following the departure of ExxonMobile, Mercedes-Benz moved from its international partner role to the global partner role it still enjoys today with IBM and AT&T. UPS quickly moved to fill the outgoing International Partner slot left by Mercedes.

For the most recent Masters, a new International Partner came on board the famously minimalistic tournament. Delta Air Lines joined UPS and Rolex in the second tier of sponsors (just behind that of the Global Partners).

The Masters still follows an extraordinarily different strategy than most golf tournaments (or any sporting events, for that matter). Reuters summed up this strategic position nicely (this is in 2016, prior to the Delta Air Lines deal):

All five are estimated to pay upwards of $6 million annually to have zero signage in view on property, share a combined four minutes of ads per broadcast hour, and follow extremely stringent, narrow rules about how their association with the world’s most exclusive golf tournament can be promoted.

Why does this work at the Masters? The tournament is one of the most coveted prizes for its athletes, and that enthusiasm reaches the fans. Like the Olympics, the Masters can set its own rules and succeed doing so. And the annual Masters is even more restrictive than those quadrennial Games!

Sponsorship at the U.S. Open vs. the Masters:

The U.S. Open is another major tournament, and it's sponsorship strategy varies greatly from that of the Masters. True to form, the traveling tournament has a different line up of sponsors than its counterpart in Augusta, but both have similar deals with their official automotive partners. Lexus has been a sponsor of the U.S. Open for the last 12 years and its sponsorship has evolved greatly over time. Similar to the Mercedes-Benz sponsorship, Lexus provides fans the ultimate VIP experience. “Lexus provides over 300 vehicles to players and Championship officials and engage fans through a variety of onsite activities and exclusive amenities.” The Lexus Performance Experience included the following activations during the 2017 U.S. Open:

One key difference between these two US tournaments: advertising. As stated above, sponsors of the Masters have to make do with a shared four minutes of ads per hour. At the US Open, advertising is not nearly so regimented. After the 2017 tournament, Adweek took a look at the relative advertising spend of US Open sponsors - and it's a doozy. Brands spent $35 million on ad placement during the four day tournament. Official sponsors American Express, Deloitte, Lexus and Rolex spent millions each on creative and placement. These placements definitely added up to more than four shared minutes per hour!

In case our official auto sponsor discussion here caught your eye, take a look at our automotive category analysis to find out more.

Let us know your comments on Twitter: @be_tandem is where you'll find us!